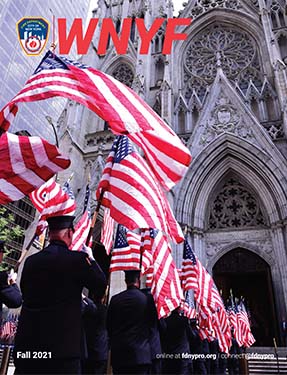 A History of CTDP
By Battalion Chief Sean Newman

Mental Performance Notebook
9/11 and Resilience: Growth in the Face of Hardship and Loss
By Lieutenant Jason Brezler and Firefighter Jim McNamara

Back to Basics
Ensuring Your Portable Radio Is on the Proper Channel: the Motorola APX8000XE
By Deputy Assistant Chief Frank Leeb

Tricks of the Trade
Laddering Tactics: Buildings with Awnings
By Captain Michael Doda

Last Word
FDNY Resilience: How We Made It Through
By Battalion Chief Jason Cascone

Paying it Forward
By Firefighter Francis A. Valerio (retired)